Virtualization continues to steamroll across the IT landscape, influencing every computer room or environment in its path. According to many IT analysts, everybody needs to be considering it.

There are no hard-and-fast rules on numbers regarding when to get involved with the concept of virtualisation. Small firms in the financial services, law and other sectors sometimes have significant IT requirements like additional security or statutory regulations. However, if a small or medium sized organisation has the budget to invest in a virtualised environment, it can pay good dividends.

“Virtualisation” enables one server or computer to act as many. Instead of keeping your important programs on separate servers so that if one application or server fails, the other applications aren’t affected, the virtualisation platform lets you run many applications on the same server. This in turn makes better use of memory and processing power in your server.
For example, one server could act as, say, three virtual servers with each virtual server running an application (i.e., file server, Web server and e-mail server). Each virtual server acts completely independently from one another so that if one crashes, the others are not affected. The net result is that you invest in only one server and enjoy the benefit of three servers.

This means that software can be easily relocated to a larger or smaller machine or even moved from one operating system to another. This is accomplished by splitting one physical server into numerous virtual servers or virtual machines (VM). Each VM hosts a specific application or set of software. As everything is virtual, it is easy to move the VMs around and make changes in the IT environment.

For example, one server could act as, say, three virtual servers with each virtual server running an application (i.e., file server, Web server and e-mail server). Each virtual server acts completely independently from one another so that if one crashes, the others are not affected. The net result is that you have to buy only one server and pay for its power consumption. In very simple terms, you get the benefit of three servers for the cost of one plus the investment in Virtualisation.

Some small businesses embark upon the virtualization journey as a way to simplify disaster recovery. Typically, they just went through their first disaster and experienced a nightmare trying to recover their systems – finding the right back up tapes, hooking them up to new hardware, and finding all sorts of problems – like not having a record of their software licenses and not being able to find the original CDs for their operating systems and programs.

They have to go through the laborious task of re-installing and re-configuring everything and making it work on the new hardware and then figuring out how to get the data from the tapes back into the systems. This process can take many days. During this time a company could be completely “down” in terms of e-mail, accounts and access to company records and data.
Virtualization, on the other hand, makes it relatively easy to capture everything onto a single system image, which makes recovery a much easier proposition. A virtual image makes recovery or failover faster, easier and more fool proof. However, like anything, it requires planning and testing, but it can be an attractive alternative for most businesses large or small.

Industry will continue to adopt virtualisation for many reasons: collections of inefficient servers can be replaced with fewer machines; software can be tested while isolated in harmless virtual partitions and data centers can gracefully (and virtually) conform to shifting work models, new technologies and changing business priorities.

The future of IT management in growing businesses will be based on virtual computing. Virtualisation makes it possible to maximise computer utilisation while minimising all associated overheads of management, power consumption, maintenance and physical space. 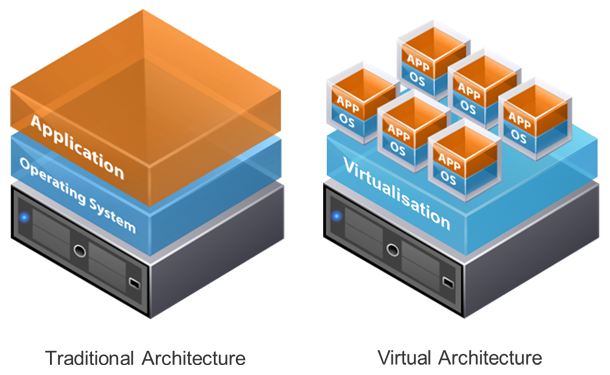