Home :: News & Events :: News :: BMW MINI dealer is first in the country with Cutting Edge IT solution from FUEL

Portadown company ‘David Prentice ‘BMW / MINI’ a leading dealer for the German prestige motor manufacturer for 27 years are ahead of the competition on IT showroom infrastructures in order to sell and service the latest range of BMW and MINI vehicles.

David Prentice BMW, situated at the Carn roundabout at the end of the M12 motorway, embarked on a state of the art showroom refit in August of this year. As part of that refit the recommendations from BMW headquarters on the latest IT infrastructure requirements also needed to be considered. David Prentice BMW have never been hesitant of embracing change in technology and in doing so have enjoyed the advantages in customer service and professionalism it brings. This ultimately adds to the whole customer experience reflected in a loyal and growing customer base and reputation far beyond the Craigavon area.

Having discussed these proposed BMW infrastructure requirements with a number of Northern Ireland’s top IT companies, Martin Mahon, Aftersales Manager of the Portadown dealership called upon FUEL to move forward on this challenging project. FUEL, who carried out a brand refit back in May of this year have provided IT services and support to David Prentice for many years and it was this proven track record of knowledge and expertise that set them apart from the other IT companies. This IT project was at the cutting edge of IT infrastructure and would reinforce David Prentice as a top UK dealership within the BMW UK family.

This new wireless technology within the business premises will be utilised by the technical consultants to investigate, study and diagnose the engine management systems using their smart hand held devices. Each new car, before leaving the showroom, will be checked for the latest software management highlighting the manufacturer and dealers focus on attention to detail.
“It’s great to be working at the cutting edge of this new technology with a company as innovated as BMW and technology embracing as David Prentice. To be involved from the start in advising Martin in how best to implement this latest technology was key to its successful conclusion resulting in generous praise from the BMW UK IT team.
It was FUEL’s expertise that took the BMW specifications and turned them into a tangible reality. With a similar attention to detail and a commitment to a high degree of professionalism, FUEL engineers drew on their knowledge and experience to methodically put in place the BMW UK strategic IT plan.

Martin Mahon at David Prentice commenting on the implementation of the new infrastructure said “Improving service levels is essential if you wish your customers to be completely satisfied and remain loyal to your business. The BMW ISPI Next project seamlessly compliments our existing IT infrastructure resulting in reduced diagnosis, programming and repair times. This ensures our customers benefit from an efficient, time saving repair process and drives down any associated costs. Paul Trouton and his team at FUEL did an exceptional job in ensuring we were the first BMW / MINI dealership in Northern Ireland to benefit from this state of the art technology. FUEL’s commitment to the project impressed me greatly throughout and I look forward to our continued partnership with Paul and his team.”

On completion of the IT project and following the signoff from BMW UK, it is clear that David Prentice BMW is a major player in BMW UK. The Portadown dealership is amongst the first in Ireland to have successfully completed this task, placing David Prentice in pole position on the BMW race track. 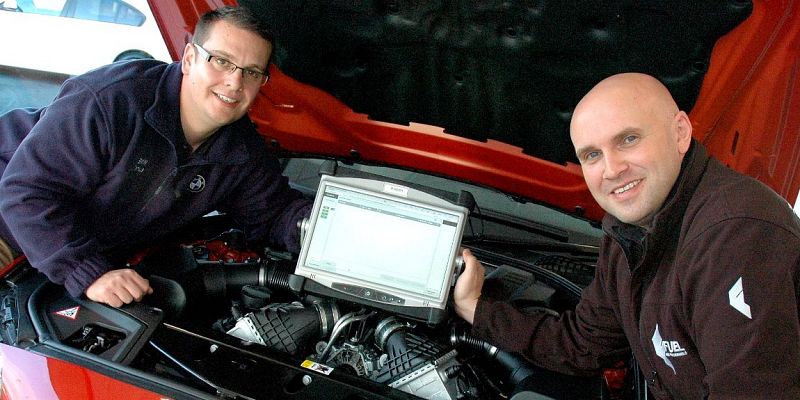