Reflecting on another great Ulster Grand Prix race week, it was clear that Paul Trouton of FUEL not only enjoyed the racing, but the craic at the FUEL VIP table was pretty good too!

‘FUEL – High Performance IT’ was once again the Official IT Partner of ‘The World’s Fastest Road Race’ for the build-up and duration of this year’s Ulster Grand Prix Race week, from 8th – 13th August.

FUEL not only provided the IT Infrastructure for the race week and the build up to it throughout the year, they also provided hosting facilities for the UGP website and e-Mail distribution for all those volunteers that work in the background before, during and after the meeting.

This was the 3rd consecutive year that FUEL provided IT support and back-up during the practice and racing sessions. FUEL support engineers were also always on-site, to help in the smooth running of ‘Bike Week’ at the Dundrod Circuit.

During the build-up to the race weekend, FUEL’s Brand ambassador, close friend and double British Touring Car Champion, Colin Turkington, added fuel to the prediction from riders Ian Hutchinson and Peter Hickman, that with the right conditions records were poised to be broken this year – and how right they all were!

The Ulster Grand Prix, having been under threat of losing its status as the ‘World’s Fastest Road Race’ during the Isle of Man TT meeting in June, just got faster thanks to this year’s 4 times winner at the MCE Insurance Ulster Grand Prix (and 3 times 2016 IoM ‘TT’ Winner) Ian Hutchinson with a blistering new lap record of 134.089mph.

As the bikes outside were ‘flying’ round the Dundrod circuit, one of FUEL’s guests for the day in the VIP marquee was keen bike enthusiast David O’Brien, Chief Commercial Officer of Ryanair. It was clear to see that throughout the day, the FUEL table with its invited guests, were enjoying not just the record braking racing but the craic in between the races too!!

Pictured above from left to right: 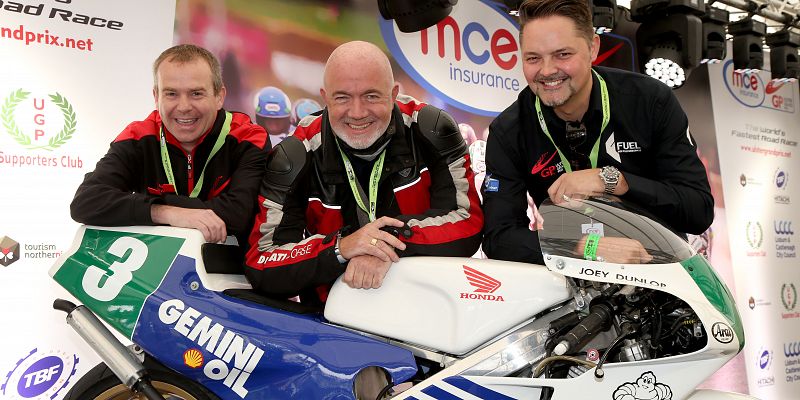