A grey, damp morning with a blustery cutting wind at Bishopscourt just outside Downpatrick and believe it or not it’s in May, the week before the world famous “International North West 200” motorcycle race week. What made it all worthwhile was the presence of two of Northern Ireland British Motorsport Champions, Colin Turkington and Alastair Seeley.

Colin and Alastair are both Business Ambassadors for FUEL – High Performance IT who have business locations in Scotland, Republic of Ireland and head office in Craigavon, Northern Ireland. Spending the day with our two ambassadors is always a very special and valued time.

Colin, three times British Touring Car Champion and Alastair, twice a British Champion in the BSB are both currently challenging for the top spot in their respective championships this season.

Both Champions were making a short film with sports commentator Stephen Watson from the BBC, for the next weeks International North West 200, where Alastair holds the record for the most wins in its history. Apart from the usual interviews with Stephen, Colin, who had never driven round the County Down race circuit before, took Alastair round explaining what racing line he would take in a racing car, rather than Alastair’s racing line on his bike.

The car used was a the BMW 330 promotional car prepared by MSport BMW UK, which is the showroom replica of Colin’s new 2019 British Touring Car. EHA Racing, Alastair’s racing stable for the 2019 BSB Super Sport season and one of his NW200 Racing teams, brought along the Yamaha 600 Supersport bike, with the newly installed NW200 engine for next week at the north coast circuit.

The day finished with our two FUEL ambassadors taking the gloves of and having some racing fun. The showroom BMW, as expected, was no match for the highly tuned EHA Yamaha racing bike from either a standing start or in the corners round the circuit, which both motorsport champions seemed to really enjoy.

To find out exactly what went on tune in to the Northwest 200 Highlights program on BBC Northern Ireland on Sunday the 19th of May and Monday the 20th May. 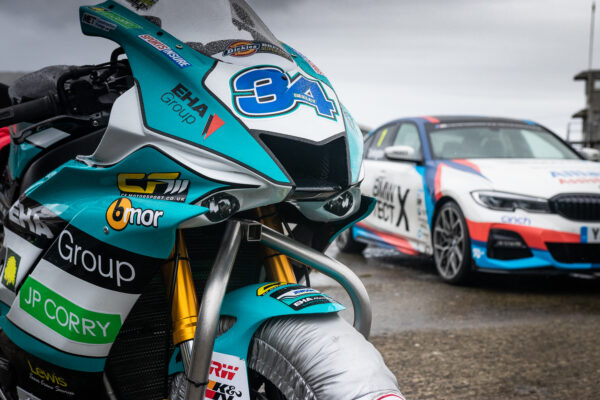